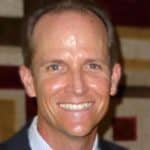 Kevin was born and raised on Florida's Southwest coast. He began playing tennis at the age of three and reached a top 20 ranking in the State as a junior. He played four years of scholarship tennis at private schools in Georgia and South Carolina. Upon graduation, Kevin returned home and worked at the Oaks Golf and Country Club from 1995 - 2001.  At that point he transitioned to Serendipity Racquet Club as Membership Director for the next 5 years. In July of 2006 he accepted the General Manager position at the Landings Racquet Club.

Kevin is very active in the local tennis community and participates in local tournaments, league teams and exhibition matches. He is a former champion for the Boca Grande Pro Exhibition Series as well as Player of the Year for the USPTA Exhibition Tour.  In his free time, he is an avid cyclist and enjoys spending time with family and friends. 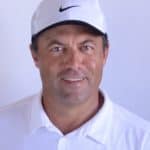 Adrian was born in Transylvania, Romania. The oldest of five boys, Adrian moved to Chicago when he was eight years old and soon after started playing tennis. He was a Member of Chicago’s National City Team and Chicago Davis Cup Team and ranked as high #3 in the Chicago Area in Junior career and ranked #1 in the city of Chicago throughout Junior career. Adrian also received the prestigious Carlton Harris Tennis Scholarship at the famous Midtown Tennis Club in Chicago. He was tutored there by Billie Jean King.

Adrian went on to be a four-year Letterman for Auburn University’s Varsity Tennis Team, where the team was ranked top ten in the nation throughout most of his Junior and Senior season.  After Auburn, Adrian coached on the WTA Tour for Anca Barna #46 and Adriana Barna #180.

Now an Elite Professional Member of the USPTA, Adrian has spent his adult career as a Teaching Professional at many world famous luxury resorts in Arizona & California. They include The Boulders Resort, The Phoenician, The Four Seasons, The Scottsdale Princess, The Biltmore and Auberge du Soleil in Napa Valley.  He also taught for prestigious tennis clubs on Hilton Head Island, Nantucket and Boca Grande.

Adrian and his wife Amy now reside in Venice, Florida with their two children, Austin and Alexa.  When not teaching tennis, Adrian enjoys spending time with the family on the beach and on the court. 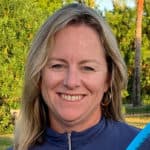 A Sarasota native, Jen was one of the top junior players in the nation, winning the under-12 nationals  before playing at the University of Florida and University of Virginia, as no. 2 in singles and no. 1 in doubles.  After graduation, Jen coached and spent a few years on the professional tour.  She was Tennis Director at the Boca Grande Club for five years.

Jen holds a Ph.D. in Anthropology from the University of Florida with a dissertation focused on youth and sports and continues that focus at the Landings Racquet Club.

Jen lives in Sarasota with her husband and two young children.